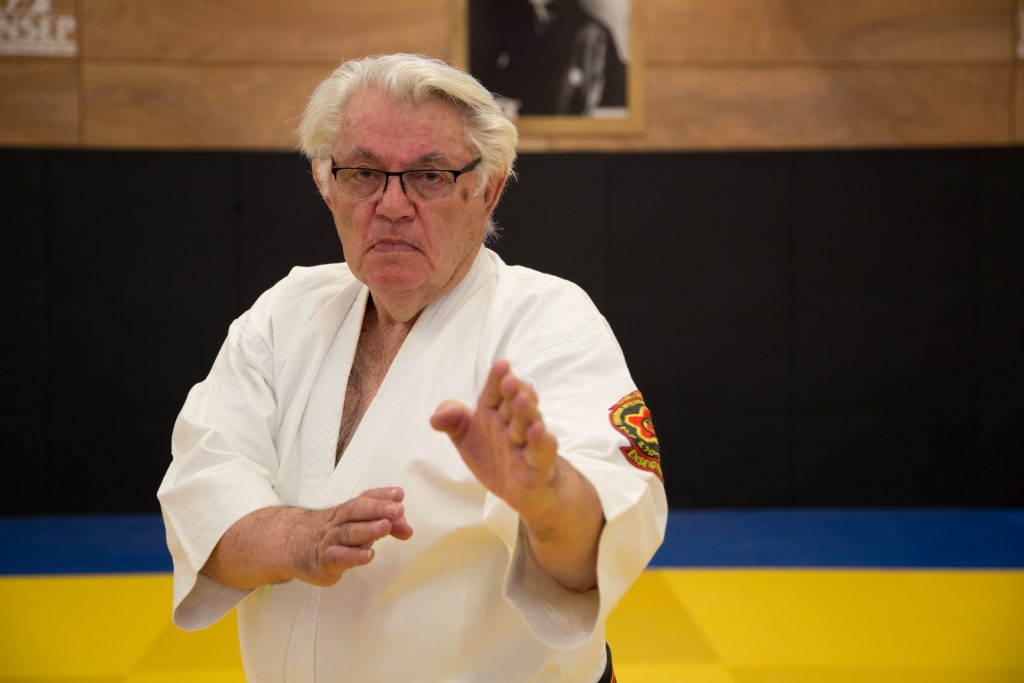 Roland Hernaez, 9th dan of Nihon Tai-Jitsu, is one of the most prominent French karate dignitaries, and one of those whose long experience – now 82 years old – is rooted in the most varied soils. He was among the pioneers in France of most of the great “budo”, before digging his deepest groove in Nihon Tai-Jitsu, of which he is one of the Founders. Questioned by “Le Mag” on the back of the sixty years anniversary that the discipline celebrated this weekend, he takes us with him back in time and through the technical universes, in search of the fundamental principle …

How does one become a practitioner of tai-jitsu in the 1950s?
At that time, in 1951, I had just discovered Judo in a summer camp where one of the instructors was practicing this discipline, still young in France. I became passionate about it and started to practice it. I must say that it was a passion that never left me and I stopped practicing and teaching judo only twenty years ago. At that time, it was a dual-practice: we were training Jigoro Kano’s martial art, randoris, which were not yet competition-based, and there was a ju-jutsu part. It ws the spirit of self-defense, street fighting and even close quarter combat. Everyone was doing both. I was fortunate enough to do my military service in 1954 at Fort Carré in Antibes where I was able to do a lot of judo at the military physical training school with the Masters Levannier and Kawaishi for whom I have the greatest respect.

And you also discovered karate …
Indeed, it was in 1956 at the Montagne Sainte-Geneviève in Paris. I was doing a vigorous Judo randori with Henri Plée, who was very strong, and he said “do you know karate? “. I tried it and immediately enjoyed it very much. Atemi were fitting my temperament and it was a dimension I missed. At the same time, I discovered Jim Alcheik, also a former judoka, who had just returned from two years in Japan where he practiced in the dojo of Minoru Mochizuki. With him, I began practicing Aikido and what he then called tai-jitsu, which also tackled the dimension of real combat.

What were the differences with your Ju-Jutsu bases?
I discovered aikido in a seminar with Tadashi Abe, but the practice with Mochizuki and Alcheik was infinitely more “manly” and there was also an atemi dimension that fitted me. Tai-jitsu is a school of ju-jutsu in terms of principles, but in Antibes I had already begun to think that the Kwaishi’s ju-jutsu was sometimes finding its limits in certain situations. I say that with no means to offend him, for he was truly a great educator. With the work of Minoru Mochizuki, we were connected to the three Founders of which he had been a direct student, Jigoro Kano for judo, Gichin Funakoshi for karate, and Morihei Ueshiba for aikido. He practiced kendo, he was also versed in the traditional ju-jutsu and sword schools, the work of koshi no mawari, defense and counter-attack against a short sword or dagger attack. He was a complete master, and there were few of those in Japan, and none in Europe. As for Jim Alcheik, I did not know it then, but it is now of public knowledge: he was part of the French secret police fighting against the actions of the OAS, a group that was then called the “barbouzes”. He died in Algiers in an attack that got him killed with eighteen of his comrades. It was at his death that I took up the torch on a technical level and that I, who was also a professor of physical education, built a pedagogical method for tai-jitsu, which did not really exist yet.

“With the work of Minoru Mochizuki, we were connected to the three Founders”

You could then have joined the judo federation, it would have made sense?
Judo was not so interested in jujutsu as such, whereas karate saw it as a complementary discipline. And at that time I was probably also very proud to be a group leader, to be a pioneer. It was the ego of youth. But there was also a logic to get closer to karate, that I was very much interested in it, because our technical variety opened us to all the fields of the practice. “Tai” the body, as a complete weapon. Minoru Mochizuki was also karateka by the way, and later his son Hiroo Mochizuki, who gradually moved towards Yoseikan in a logic closer to ours. I was deeply inspired by the technical input of Shorinji Kempo as well. Hiroshi Aosaka stayed two years at my home when he arrived in France and I owe much to this school, of which I was the first black belt  in France. This is how we became the first associated discipline of karate. President Delcourt at the time said to me: “That’s good, but if you want to be in the perspective of karate, you need kata.” 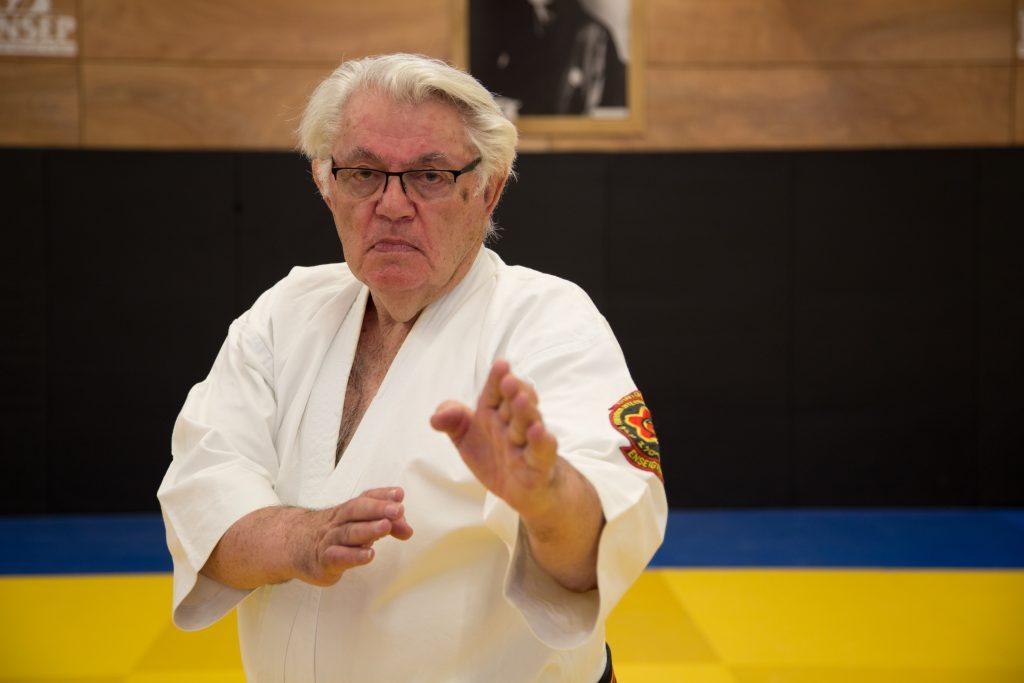 You did not have any kata?
No, the spirit of Tai-Jitsu at the time was one of freedom. We sought the variety of solutions, not their codification. With Daniel Dubois, we therefore proposed three kata, which were initially sequences to perform alone, similar to karate. Subsequently, we proposed six kata to be performed with partner, regrouping almost all the techniques. To this day, we are still working on this. I currently work on sequences for kids. They like it very much, and it’s a way to make them work that has been too neglected so far, in my opinion. I put together three simple combinations, three small demonstrative confrontations. Obviously, the spirit is different from adult kata, but I try to put forward the principle underlying all this technical wealth …

And what is this principle?
Younger, I was sensitive to the spirit of efficiency, the dynamic and powerful side of tai-jitsu. At my age, I continue to express myself using it, when I can no longer do it in Judo for example, because there is all the subtlety of the work of locks, the relevance of tai-sabaki. In the beginning of this practice, I had already felt that the contribution of aikido’s body displacements brought a lot, especially as, by comparison, judo and karate were rather poor in that dimension in those years. Judo has subsequently gained in subtlety with the contributions of the great experts coming from the Kodokan, but lost them again by valuing too exclusively a sports practice. In karate, however, this work deepens regularly, including in competition from what I see. In the combinations for the children, I make sure that they are attacked three times. Twice they temporize, trying to avoid the act, before finally acting on the third aggressive attempt. It is a symbolic way of transmitting the essential: the dimension of control which is at the heart of budo, at the heart of the concept of tai-sabaki. This is for me the fundamental technique, the central principle, this ability to create emptiness, to fade for better control, and the concern that goes with making a measured and non-lethal response. 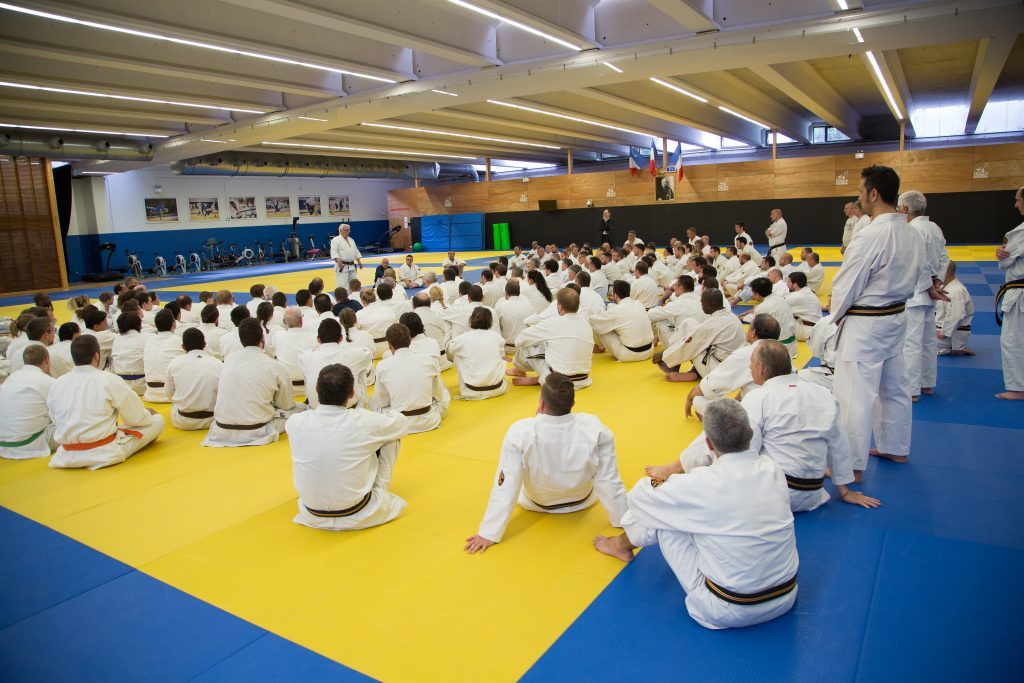 Would that be a philosophy of life?
This is not a theoretical choice. Martial arts, your own practice, influence your life. It is what you are and it deepens with you. In addition, in our practice of tai-jitsu, there is such a technical variety that you can literally forge your own system. As I said, younger I was impulsive, quite pushy, I liked to dominate. My practice resembled what I was. But what you learn also becomes second nature, shows you another dimension that changes you. It’s not the idea to get into a mold. But accompanying the attack rather than blocking it, it is a whole different vision of the world! There are some fundamental things that are happening within us when we understand how to “get out of the axis”. These are levers that can act over your entire life. This is what makes the greatness of these arts and what also gives meaning to lengthy experiences such as mine. We give ourselves time for permeation.

“This is not a theoretical choice. Martial arts, your own practice, influence your life. It is what you are and it deepens with you.”

Do you still have fun on the mats?
I absolutely enjoy myself! As I said, there is still a lot to do, I can be useful, I do seminars in France and other countries, and I continue to work for myself on technical fields that I have not yet fully explored . And then, for me, it’s also the holiday season. I am lucky to have students who surround me with a lot of human warmth. Martial arts brought me everything. I have the privilege of living with a woman with whom I get along very well, to have a country house with horses and chickens, and I enjoy it every single day. I have a satisfying feeling that I have made my life complete, and it is thanks to martial arts. 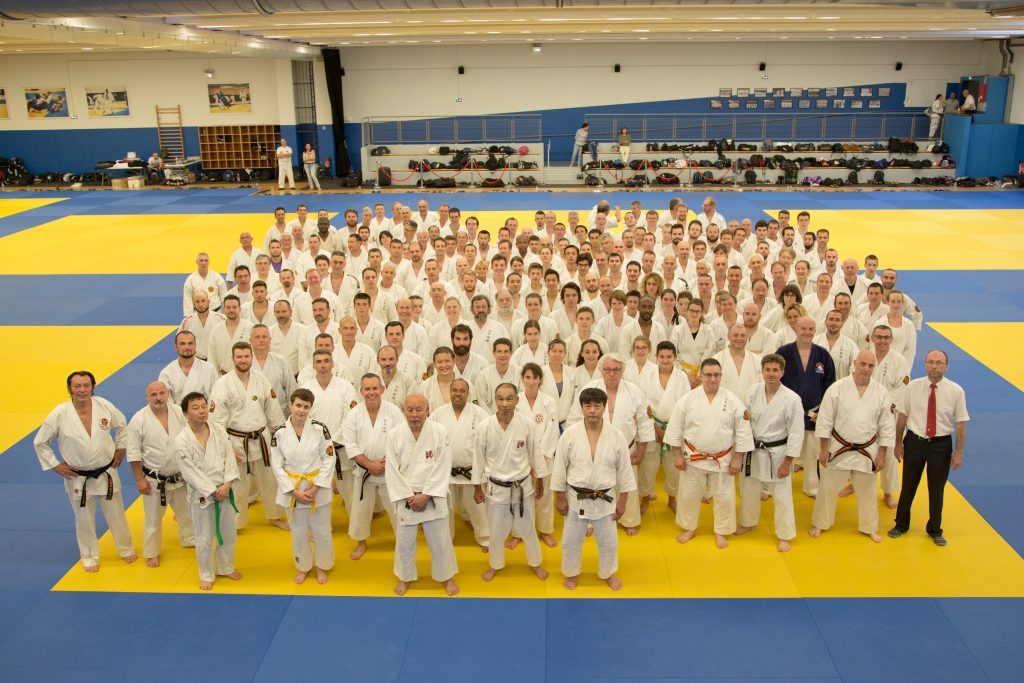 Translation of an interview realized by Emmanuel Charlot on 5 June 2017 during the 60 years anniversary of Nihon Tai Jitsu in Paris, France.
Photos: Lionel Froidure, www.imaginarts.tv