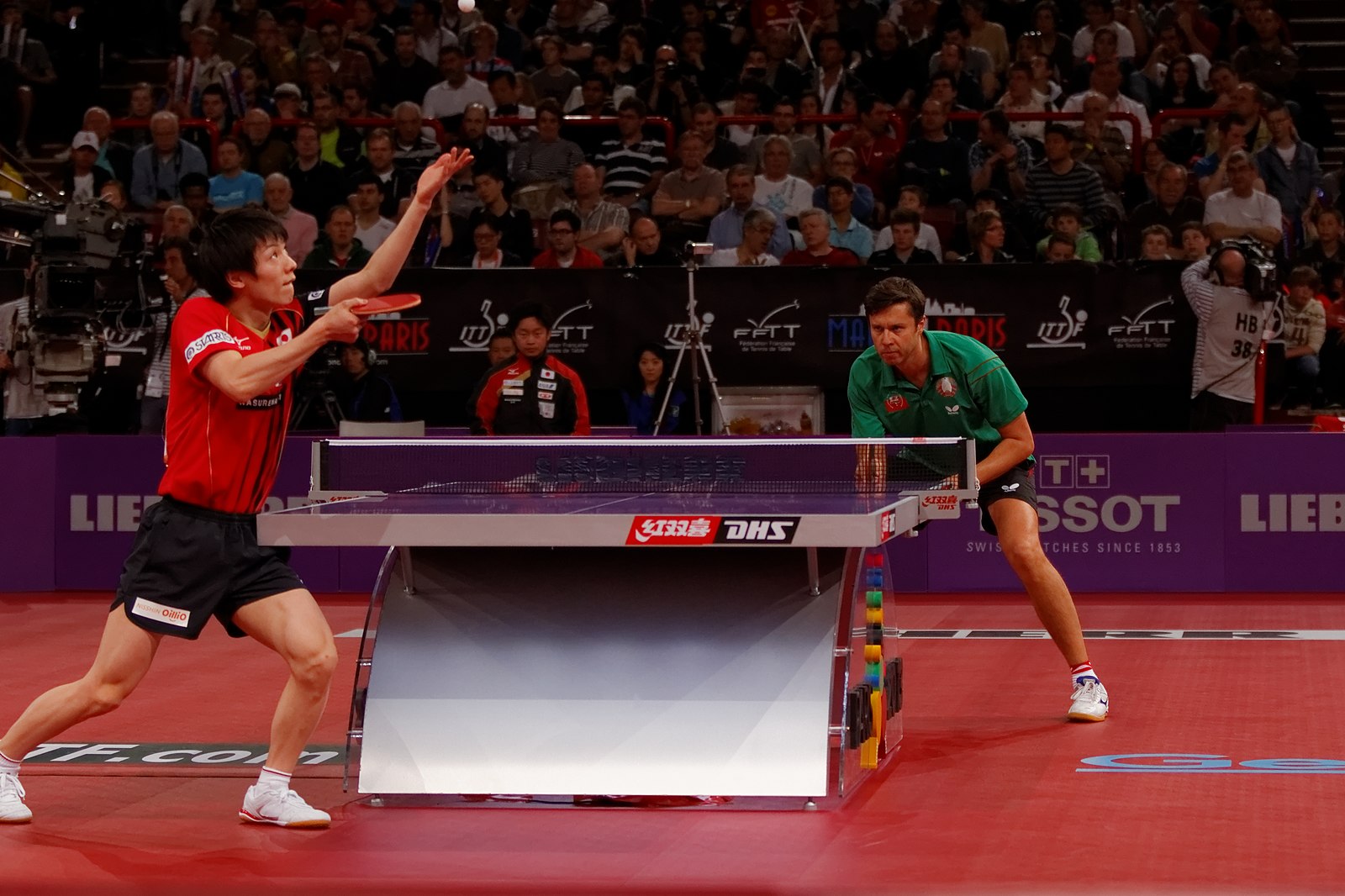 This article was initially published in the French Magazine Dragon Spécial Aikido in January 2019.

Any technique in Aikido begins with Kamae. That is true for Tai Jitsu, Aiki-ken and Aiki-jo, to the point a beginner will often see himself “corrected” if he puts the wrong foot forward. But out of its traditional aspect and its martial appearance, what is the actual point of the guard?

The term Kamae can be more or less translated literally as posture but is often understood as the guard, i.e., the waiting posture, the one that directly precedes the fight itself. The guard is an essential element of martial arts, and more generally of any physical activity. Think of the guard of a boxer or a fencer, or even at what is done in different sports on this subject.

A look around the table

A quick glance at various sports activities allows us to clearly identify postures. A rugby player about to tackle will stand firmly on both legs, knees bent and ready to pounce. A sprinter in the starting blocks. A tennis player’s feet parallel, knees bent and racket in front of him.

Let’s take table tennis as an example, and let’s take a closer look at the guards of both opponents and their respective meanings. The server is most often showing the side of his body from a corner of the table. He uses his arm to cover the movement of his racket, hiding the effect and direction as long as possible to be able to surprise his opponent. In doing so, he turns his back to a part of the table, but this risk is reduced since he logically positioned himself in a corner, making it difficult to get in his back.

His opponent is waiting. He knows the attack will come, but he does not know what it will be. He must, therefore, choose the most versatile position possible in order to respond to the upcoming attack. Logically, he is placed in the center of the table, facing forward, knees bent and racket in front of him, allowing him to cover as much surface as possible without presenting blind spots.

How is that relevant to Aikido?
In a context of pure opposition, opponents seek a decisive advantage and the posture of the server and the receiver are essential elements of this. The server will seek to hide his intention and movements, and to put the receiver in the most difficult situation possible, pushing him to respond in a certain way. The receiver will try to avoid showing flaws or, on the contrary, will present some voluntarily, in order to encourage a particular . He will also choose a position that allows him to reach any end of the table easily without putting himself in danger for the next shot. Before the first ball is hit, we are in a strateg game where every element counts.

There are many guards in Aikido, Hanmi being without a doubt the most commonly used. Hanmi indeed presents the basic conditions of a guard: it limits the risks by presenting the body sideways and it allows for a certain mobility. But is it really a guard?

The question matters because for it to be a guard, we have to try to “guard” something … This implies that Uke, the attacker, is serious about compromising our physical integrity. This is obviously not the case if he is happy with just grabbing a wrist that is gently offered to him, before waiting for the technique that will come to counter this dangerous attack.

Let’s go back to our table tennis analogy. As Uke, my role is that of the server. I launch hostilities and my goal is clearly to win over my opponent. This implies that I seek to hide my movements and my intention for as long as possible while launching a frank and determined attack. A Shomen Uchi that changes direction ten times and ends up touching Tori without being able to inflict any damage is not such an attack. Touching is not enough in martial art. My attack must be able to defeat my opponent here and now, or at least create the conditions for a quick victory.
Tori is in the role of the receiver. Out of a Kata context, he does not know the attack that is coming his way and he must, therefore, be ready for anything. Hanmi gives him options by limiting the possible targets, and it can encourage a certain type of attack by closing a number of options. Direct his hand in a certain way towards the face of his opponent may, for example, encourage him to go for a grab, while it seems absurd to want to grab an arm that is passively waiting along the when a strike would be simpler and more effective.

The guard, a question of context

Not all waiting postures are equal, and is paramount. An English boxer will keep his fists up at the level of the head, elbows along the body because he knows that his opponent can punch him and because his gloves offer significant protection. A Kyokushinkai karate fighter, for whom punching in the face is prohibited, will take a different guard which will favor protecting the torso over . In both cases, the context is that of a duel, which implies that the intention is strictly forward and that it is not necessary to be able to change direction.

Aikido is not a sport and its context is by definition more open. The choice of a good guard is all the more important. Attacks can occur from any direction and opponents can be numerous and/or armed. Therefore, it requires to protect as much area as possible, including the center line of the body, and keep an ability to move in all directions.

The guard, an invitation to attack

In the dojo, without actual opposition, training often turns around kata where attacks and defenses are already known. While this is a useful practice to understand the basics, it also comes with a number of limitations to really go to the next stage. Martial arts are designed to cope with open situations and extreme violence. This violence is obviously not something we aim to get on the mats, but the intensity, intention, as well as a progressive opening of the martial context should be part of our objectives.

In a system, as the situation is defined by the protagonists, Tori is de facto passive. He knows the attack and waits for it to happen, trying to react at the right time. In an open situation, however, it is impossible to know in advance what the attack will be and reacting to it in time will be all the more difficult. A simple solution is to influence the attack. It would be wrong to believe that an opponent really has an unlimited choice to attack us. A competent adversary will indeed be able to “read” our openings and rush into them, while he will have already rejected a certain of options that he did not consider relevant. Tori’s job then consists in influencing this choice. That’s what Hiroo Mochizuki sees as Tsukuri, the preparation phase.

Several years ago, while studying a system of Silat, I was shown strange guards, which at first glance seemed to dangerous because they had a particularly visible opening. It was the case and it was voluntary. A guard will always have openings but by choosing to make one opening particularly visible, it is possible to encourage the opponent to choose a particular attack. By my guard, I thus reduce the universe of possibilities and leave my opponent with the illusion of choice.

Aikido is no different. Or at least it should not be. If both partners are in Hai Hanmi, left foot forward, the options are open. If one of them shifts to the right, the situation changes and the balance is broken. If, when moving, his left hand enters the field of vision of his opponent (for example with a ), the latter will need to react accordingly.

Some arts chose to focus on receiving forces without moving the body much. Aikido, however, chose mobility as its core strategy. This is making sense for an art coming from kenjutsu , at least if we understand what this mobility is and what it means.

What mobility are we talking about here?
There are many levels of mobility. Being able to move in one direction is already being mobile, but is it enough for Aikido? In a totally open environment, we must be able to move in all directions, quickly and without giving out signs. This involves being light on our feet so as not to waste time transferring weight. It also means avoiding closing our own options by selecting a guard that lacks versatility, such as being fully sideways.

There is no guard without opposition

Aikido is not made for competition but it remains a discipline of opposition. Beyond its ideals of peace and harmony, in its simplest expression, Aikido consists of learning how to manage an opponent who looks at attacking our physical integrity. The concept of Kamae can in this context: to preserve our physical integrity and give us the means to respond best to . Without danger, there’s no need to protect yourself.

Make your Aikido alive. Put your partner at risk by making your attacks more dangerous and by looking for his weaknesses. Only then will you give him the means to progress and understand the importance of Kamae.