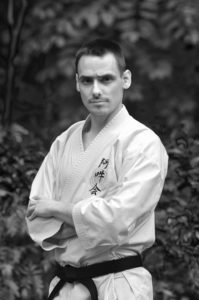 Xavier Duval started Nihon Tai Jutsu in France in 1998 with Thierry Durand (6th Dan, Seibukan Academy/FMNITAI) and Max Lormeteau (9th Dan, Seibukan Academy/FMNITAI). He trained with many masters from Nihon Tai Jutsu as well as other martial arts (Hapkido, Kali, Aikido, etc.) and had the opportunity to travel to many countries to practice, including Japan and South Korea.

Xavier started learning Aunkai from Akuzawa sensei in 2010 and has received a Menkyo Kyoshi from him (teaching license).

Hugh Stanley started martial arts at the Seishin Tanren dojo in 2012. After 6 years of hard training and commitment in Nihon Tai Jutsu and Aunkai, he successfully passed his Shodan in October 2018.