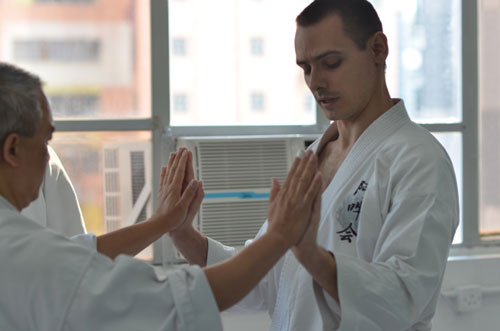 When I started training in martial arts, around 20 years ago, my practice was primarily external, centered on accumulating techniques and trying to know all the possible answers to pre-determined attacks. In parallel, aware of the importance of having a good physical condition, I sought to reinforce myself through bodybuilding exercises (more or less correctly realized) and running.

It was techniques before the body, which only acted as a supporting character.

Things have changed since then and my discovery of Aunkai is obviously not stranger to that. If I am still convinced today that both approaches have their advantages and that it is quite possible to reach a very high level through an external practice, I do believe that an inside-out approach can save precious time in the progression of an individual. And that’s why if I changed the way I practice, I’ve also changed the way I teach.

Correcting the body – the first step in the practice

I met Fabrice a year and a half ago, give or take, and we have been practicing together really seriously since the beginning of 2019. A former Judo at a good level, Fabrice is powerful with a strong fighting spirit. But this power came with extreme tension that did not allow him to exploit it fully. Without fluidity and a fine understanding of his body, he displayed great physical power … which had little effect.

Since the beginning of the year, Fabrice and I have been practicing together twice a week, in private. If, in previous months, we mainly did jujutsu together, Aunkai has been our focus since then. Fabrice got hooked very rapidly by this seemingly austere practice, whose main objective is to make the body the technique. The first half of the year was an opportunity to improve its conditioning and make it “useful”. Gifted with considerable power, he quickly reached real results that allowed him to gain confidence in his ability to generate and receive forces.

But conditioning is only the surface of Aunkai and the heart of the practice is really to change the way we use our body to obtain a phenomenal effect with negligible effort. If this transition is probably the most difficult one to achieve, as our ego is easily satisfied with the results conditioning alone can bring, Fabrice has embraced the idea for the last 2-3 months. Conditioning already made him more efficient, while not solving some of his issues: heaviness, the tension on contact, lack of fluidity. Although these are not fully resolved yet, this deeper work on re-organizing the body brought almost immediate effects.

Conditioning is only the surface of Aunkai and the heart of the practice is really to change the way we use our body, to obtain a phenomenal effect with negligible effort

Educate the body, to use it better

For the last month, Fabrice tried Kishinkai Aikido again, a practice that is not only highly technical but demands very specific body skills, which sometimes go against those we train in Aunkai. And yet, while he had not practiced Aikido, or even worked on any technical skills since January, his level had increased exponentially. More in a few months than many practitioners in a few years. More fluid, more present, lighter on contact, his practice has drastically changed. So much so that during our first Aikido session, I found myself thinking “it’s really great what he’s doing.”

Beyond this simple anecdote, this has confirmed what I’ve been thinking for years: there is no incompatibility between Aunkai and other practices, including Kishinkai, provided we practice in a way that increases one’s body awareness to a level high enough that one can use it in the most appropriate way depending on the context. When Fabrice did Kishinkai techniques, he was doing Kishinkai. Not Aunkai. But Aunkai allowed him to refine his body, his alignments, his quality of movement, so many elements that are critical for any martial art, whatever it is.

Obviously these results come from his hard work. If I was able to give him a direction, he was the one who take all the inputs in, feedbacks I gave him, watch videos of dozens of practitioners to improve his eye and understanding, participate to seminars with high-level practitioners, and sought to improve his body awareness in his daily life. A teacher can give the keys and show the door to open, but it is up to the student to cross it.