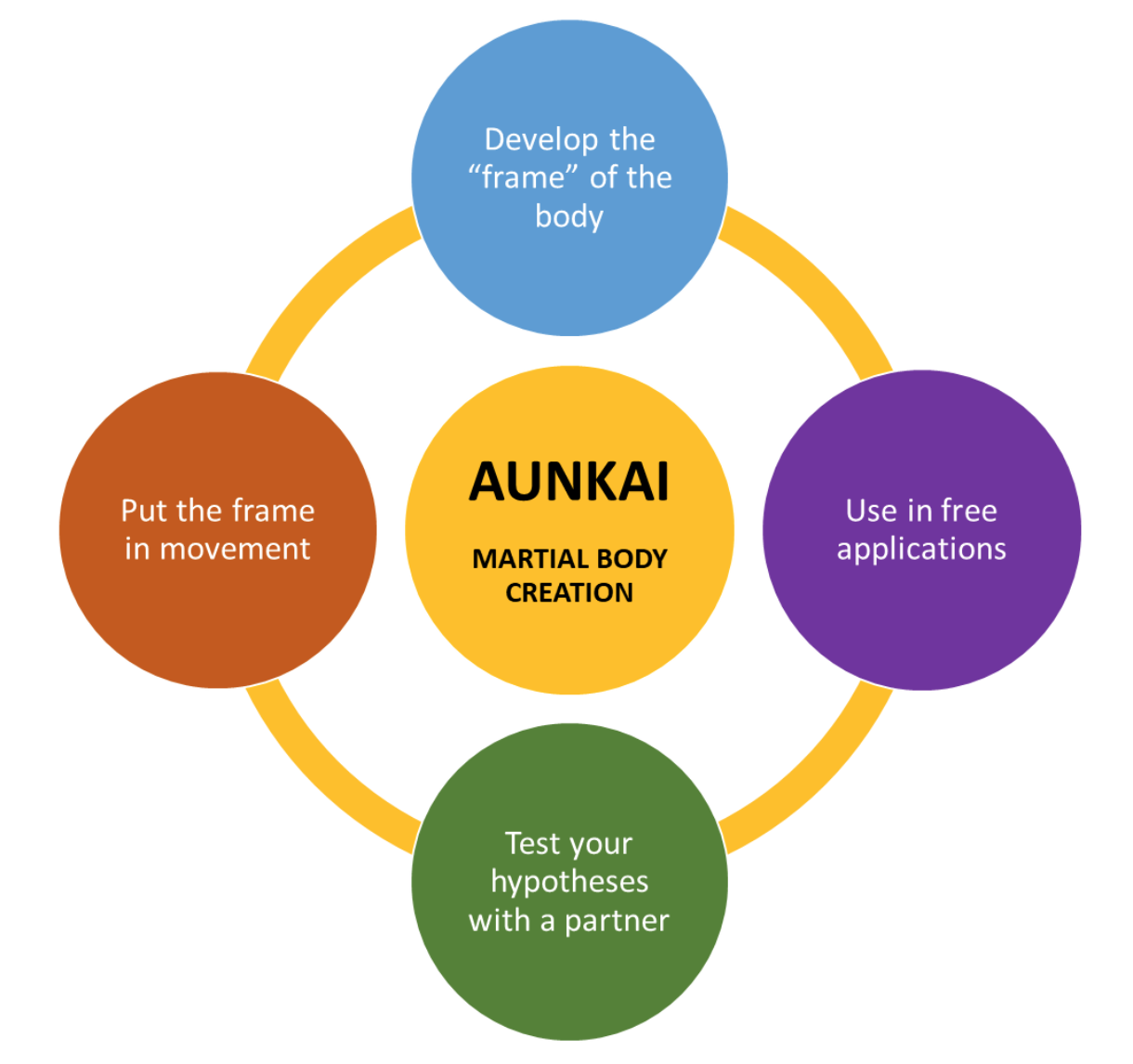 Aunkai Bujutsu is a relatively new school (created in 2003), built around the very simple idea of creating a martial body. In doing that, it chose the opposite direction from every single school that bases their pedagogy on the learning of forms or techniques, which is… most of them.

There’s nothing wrong with learning forms or techniques, and this is an approach that has proved to work in a great number of instances. However, it also comes with a number of issues:

In Aunkai, the pedagogy goes exactly in the opposite direction. We focus our attention on the quality of our movement before we immerse ourselves in any technical elements. Why would we do that? Simple. If you take grappling, for example, it is obvious we are not all born with the same body qualities and that it has an impact on our efficiency on the mats. If my goal is to unbalance my opponent, but my body is by default already unbalanced, I am starting with a disadvantage. The opposite is true as well: if my body is strong and its different parts are already working well together, unbalancing me and throwing me to the ground will take much more.

Aunkai focuses on just that: rewiring the body and the brain to make them fit for martial arts practice. At the end of the day, it doesn’t matter much if your interest lies in striking, grappling, or anything else, all you need is to have a body that’s built for it.

How does it work? Through a very simple approach that goes back to basics, and allows going back and forth between its different elements. In its simplest form, the method is built on four pillars.

These four pillars are not happening in chronological order of course, and there is no such thing as “I finished phase 1 so I can now move to phase 2”. Rather we need to go back and forth between these four components as they have the potential to feed each other.

Aunkai is heavily based on Tanren 鍛錬, i.e. on the idea of forging or tempering the body for martial arts. The consequence of that is it would be easy to consider that the method is simply built to create a strong body. If that’s not entirely wrong, we need to the very least to define what we call strong.

The purpose here is not just to create a very conditioned body where segments are very well connected to each other so we can just move in a unified and powerful way. If that’s already much better than not having a conditioned body, it still heavily relies on very basic body mechanics that will quickly find their limits in front of much bigger or younger people. If conditioning is a necessity and probably even the first foot in the door for Aunkai, our aim is to deeply change the way we use our body. Not just to be stronger from a quantitative point of view, but also from a qualitative one.

What does that even mean to be qualitatively stronger? It means that at the end of the day what matters is not that much the strength we generate, but the strength that is perceived at the other end. In other words, a force of 100 that is easy to perceive, locate, and understand, will have less effect than a force of 10 that we cannot comprehend and manages to go through. To generate a power of 10, you might not need extreme conditioning. But to make it hard to comprehend and block, you will need to move in a way that your opponent does not recognize. That’s when we start moving from body attributes to body skills.

Body attributes are linked to your conditioning: your muscular development, how your connective tissues knit your body together, basically how much force your body can generate and take in. It is of course essential and one just needs to see Akuzawa sensei to realize how his body is extremely conditioned, way beyond what we usually see in people. Part of it can be acquired by training, through the repetition of Tanren, but some people are also more naturally gifted than others and it will be hard to compete on conditioning only with former athletes like sensei.

But when you look more precisely at what makes Akuzawa sensei so special, after removing his body attributes, you realize he organizes his body in a very specific way. These are his body skills. Here we are not looking at muscles or connective tissues anymore but at the relationship between the different parts of his body, in static and in movement. Looking at that you can isolate some elements such as the relationship between his neck, chest, and hips for example, and compare it to what people usually do. You can also look at how he generates a movement, and typically how he tends to dissociate parts of his body at very specific times. His quality of contact also differs greatly from what people normally do, as the contact always feels light, yet heavy, without any apparent tension, leaving us to wonder where his body actually is. For most people, this is not innate. But it can be acquired by rewiring our body and brain, pretty much the same way we would change the operating system of our computer or phone.

Changing the way we are using our body is arguably the most important teaching of Aunkai. If you go back to the three main teachings according to Akuzawa sensei, it’s all about “walking, sitting, standing”, none of these being related in any way to how conditioned your body is. On the contrary, they are related to how you control the different parts of your body.

I believe the greatest adepts of the past really had extraordinary abilities. They certainly understood what I am explaining about joint rotations, spirals, standing up, sitting down…

Below is a short summary (far from being exhaustive of what are attributes vs. skills).

Getting these skills is part of the Aunkai journey and something that can easily be reused in whatever martial art you practice, as it eventually comes down to how we move our body efficiently for a martial encounter. Efficiently meaning that our body becomes exponentially harder to stop and that the effect produced on our opponent becomes drastically higher.

Let’s take an example. Usually, when we punch with our right (and rear) hand, we push into the ground with our back foot, the force goes through the body, the shoulder gets engaged and the fist is launched. Now if you do that with someone trying to block you with his hand open on your fist, chances are you will get jammed as the pressure between your fist and his palm increases. The force generated might be strong but it is also easy to perceive, hence to block.
If we take it the opposite way now, and we look at moving differently. From the same configuration, instead of pushing into the ground and bringing my body forward, I realign myself to the back, decreasing gradually the pressure at the point of contact. It becomes harder to feel where my body is as the pressure is fading away. I still need to go through now, but it doesn’t have to be by pushing in the ground. Instead, I can look into my own body organization to create some space, eventually freeing my arm to the point that moving it doesn’t feel so difficult anymore. The power generated is not as strong as in the previous case, but it’s this time harder to perceive and locate, hence to block.

Now if you can punch that way, what stops you from unbalancing someone you are grabbing by the sleeve in the exact same way?