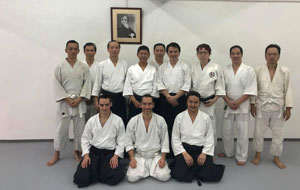 We were lucky to host Leo Tamaki, founder of Kishinkai Aikido, in Hong Kong this week for an intensive week of training. Going from Tuesday to Sunday, martial artists of Hong Kong had multiple opportunities to train and discover what makes Kishinkai so special.

Along the week, Leo Tamaki made sure to explain principles in-depth and how they were used universally in taijutsu (empty hands) and (weapons – bokken, jo, tanto). Although the technical curriculum looks complex and relatively wide, it looks much simpler when we look at how it is actually built as all the elements are interconnected.

Other important takeaway of the week: the role of Uke. In Kishinkai, Uke has one goal: being dangerous and trying to inflict damage to Tori. He is never complacent. Because of that, he needs to be extremely available, and be able to move lightly to protect himself and remain dangerous. There is nothing worse than a Uke grabbing his partner and… waiting for his reaction. In Kishinkai, if Uke has a chance to release his grab and punch, he has no reason not to. Similarly if Tori tries to punch him in the face and he can move to avoid the damage, he should do it. Techniques in Aikido are never the final goal, which means Tori does not want to do Ikkyo. If he can inflict damage to his opponent with atemi, that’s what he will be looking for, and Ikkyo will happen because the opponent is smart enough not to be destroyed on site.

Kishinkai Aikido is a very deep school, with a method that is concrete and simple to follow. Less than a year after the creation of the Hong Kong group, our students have already greatly improved showing the efficiency of the method.

Leveraging on Leo Tamaki’s trip to Hong Kong, Xavier Duval successfully tested for his Nidan (2nd dan) in what was a pretty dynamic (and sometimes rough) exam.