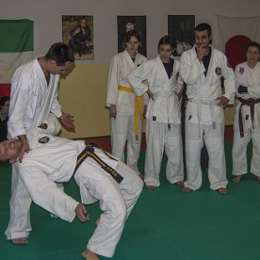 After the seminar in Imola, Italy, an article has been released in the city’s sports paper. Below is a translation of this article and the original can be found here.

The master Luca Iacobone, in col

laboration with the CSI in Imola, organized a very important event at the Centro Sportivo Montericco, with the presence of the teacher Xavier Duval, from Hong Kong, already 4th Dan at just 34 years old.

The master Xavier Duval is already well known internationally, both because of his young age as for his skills as a teacher: “I try not to teach too many techniques, but rather principles. I use four, maybe five principles, from which we can derive an almost endless amount of techniques. Sometimes it can suffice to use one only, sometimes two. The central point is how we use our body efficiently, not by relying on muscular power. It is all about taking advantage of our structure, and be able to use the force of gravity. “

This concept was the centerpiece of the seminar organized by the master Luca Iacobone: “let gravity fill the body and flow through it, without wasting energy that would hinder it”.

Master Luca Iacobone reveals that “the amazing thing is that throughout the lesson, at no point did I feel Xavier using any force. It’s a question of movement, gravity, balance “.

Watching from the side, we could see the base of Duval’s work is a deep perception of his own body and the speed of movement. No one can resist him and all ended on the mat.

Moreover, the CV of Duval speaks for itself: after he started practicing martial arts in France in 1998 with Nihon Tai Jitsu, which he started teaching in 2012, he practiced many other disciplines in parallel, such as Hankido, a sort of Korean Ju Jitsu, Aunkai, a Japanese “Tai Chi”, and Brazilian Jiu Jitsu. A French national, living and working in Hong Kong, where he was able to specialize in the practice of martial arts. In order to study he often travels to Japan or South Korea. Speaking three languages (French, English and Chinese) and constantly immersed in a confrontation between different cultures has allowed him to cultivate an open and multifaceted mind.

Certainly this initiative by the master Luca Iacobone represent a stimulus for all fans of martial arts and the hope is that others seminars of this level will be organized.