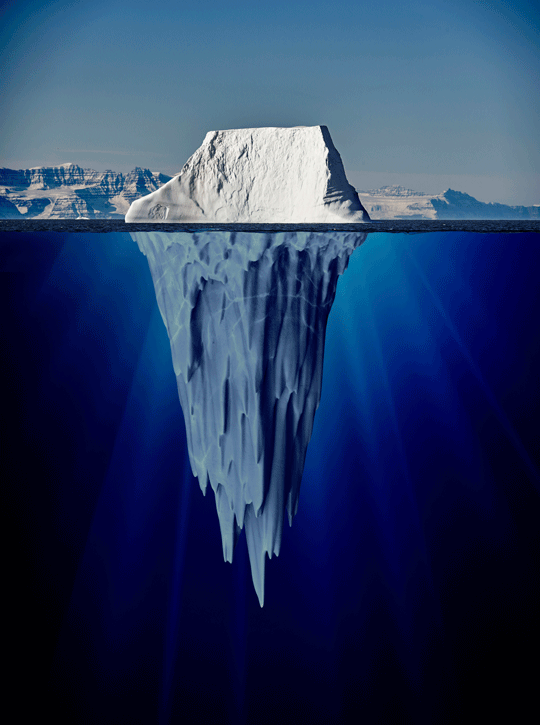 Martial arts are comparable to an iceberg in a way. A visible part, impressive by itself, and a hidden part, under water, often much bigger but invisible. The visible part of the iceberg corresponds to the external shape of an art: its techniques, whereas the immersed part corresponds to its deeper principles, without which the said techniques would not even exist. If this is pretty easy to understand on paper, we can only notice that the great majority of people remain on the upper part of the iceberg, on the surface. And it’s hard to blame them, because the invisible part is by definition not as accessible.

Why do you need to access the deeper layers?

That’s a very legitimate question actually. When I talk about deeper teachings, I think of the way to use the body (among other things), and so learning how to move in a specific way, that differs from what we ordinarily do. Not all martial arts work on this modification, and that does not make them irrelevant. Thai boxing is a good example, as it doesn’t focus on modifying the way one uses his body, but no one would question its efficiency.

Why then modifying the way we move? A few reasons. First is context. Bujutsu implies to be able to respond to an attack launched by people who are stronger than us, or more numerous, or who attack us by surprise or in a difficult situation. The context highly differs from that of combative sports where the existence of common rules and weight categories bring us in a “known” territory. The second reason, linked to the first is that ageing is not playing well for us, and that getting older will necessarily have a toll on our physical abilities. Deeper teachings are a response to this diminution of our athletic capabilities.

In the case of Bujutsu, I am convinced that many of them were conceived for people moving in a certain way. Copying the external form of a technique is indeed a starting point (the first of the Shu Ha Ri process) but copying a form will only bring limited results. When I met Akuzawa sensei for the first time, I was not only surprised that my techniques did not have any effect on him, I was also taken aback as his techniques were “wrong” according to my execution criteria, but unstoppable nonetheless, letting me to realize this was not an angle or technical detail issue, but really “something more”. Beyond the use of the body, Koryu tend to have a particular “taste” that differs between the schools. That is also the case of modern schools that have heavily been influenced by Koryu, and here I think particularly of Aunkai and Kishinkai Aikido, two schools that are extremely different but both have a unique taste. On the other hand, it’s common to meet practitioners, even advanced, whose practice has no taste. Techniques are there but feel empty, technical curriculum could be wide, but nothing seems to act as a common link.

From there, if looking for deeper teachings is not a must, I believe these teachings are the key to truly understand what we do and to go beyond the simple choreography of movements, as good looking as it could be.

How to get there?

That’s the 1 million dollar question. Two options: finding the hidden elements by yourself or finding someone who could teach you.

Working it out on your own is a rather daunting task, as it implies searching, failing, searching again, failing once more, and finally understanding what works and what doesn’t. That’s clearly a laborious and rather inefficient process, even more so if you start from scratch. If “stealing the technique” is often mentioned, it needs to be stolen from someone, it’s not a question of spending three years alone on top of the mountain, having a satori and suddenly being able to do it. A great sense of observation is obviously necessary to make that happen, Mitori Geiko was and is still today one of the ways to get it.

Having a teacher is probably the fastest and most efficient method, as having someone who’s already been through that journey and can help you take the right path directly can be a real time saver. A teacher also enables you to receive the technique, get the feeling of it, and get hands-on corrections. If YouTube is a great tool to get new ideas, nothing replaces direct teaching. However, finding someone with these skills, and actually able to transmit them is not that easy. Examples of skilled people unable to transmit are common, but people who have both exist if you look hard enough.

In both cases, the only thing that will enable you to access a deeper practice is work. Finding the best teacher will bring no result if you don’t have a committed practice and if you don’t put yourself constantly in question. Being a “student of” is not and has never been a guarantee of anything. Skills come from a very deep sense of observation, and a never ending work  to understand the principles and assimilating them physically.