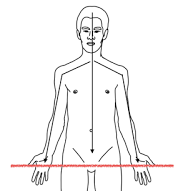 A year ago I mentioned on my French blog the research I had in progress, including the increase in density that resulted, and the links that I perceived between the density / weight perceived and the use of the sternum, which is a key element of the alignment of the body and therefore the transmission of weight. A year later, my perception of the subject is a little more complex.

What do you need density for?

This is the first question that should be asked at each stage of the practice: why are we doing it? Each proposed exercise has a purpose and the physical attributes developed are made to make us in a certain way and create a certain quality of contact. Density is one of the possibilities, but it is obviously not the only one.

The density first results in a sensation of weight, which seems more important than the actual weight of the person. Anyone who has touched Akuzawa sensei knows for example how much the weight he transmits is incomparably higher than the 60 kgs he announces. On the one hand, this makes it extremely difficult to move him, but on the other hand it also gives him a considerable advantage as he uses the force of gravity to literally put that weight on us. Far from working force against force, this approach creates an unusual type of power, that goes without tension.

In a grappling format, whether we are standing or on the ground, this density is a definite advantage. But it is not less an advantage in a striking work since a dense body will allow to perform heavy and devastating strikes, but also to absorb them without damage. It’s also a quality that I think is relatively easy to develop, if you use the right tools. I also remain convinced that working “full” is more forgiving  than “empty” work, which can be an advantage in a various situations. This idea of density goes along with some of the ideas proposed by the excellent martialbody.com, and in particular what they call “Heavy Body” and “Stable Body”. If you don’t know them yet I encourage you to visit their website and read their articles, or take a look at the exercises they propose in their online training section.

How to train it?

There are many exercises that help increase density and I will not go into the details of each of them. However, it seems to me that all of them are structured around two main elements: a correct alignment of the body and the relaxation of the joints.The notion of alignment is the one I mentioned in my first article on the notion of density, especially through the use of the Kyokutsu (the sternum) that I still think plays a central role in the correct alignment of the top body due to its connections with the chin, the lower back or the elbows, and therefore in the transmission of weight. Whether transmitting the force of gravity in the partner’s body or allowing a force to flow through the body to the ground, mastery of the sternum is an indispensable element and will help to give this impression of solidity.Is density the alpha and the omega?

With all these advantages, is it necessary to look at any other body skills or can density be considered as some sort of martial panacea? It is obviously subjective, but I do not personally believe that being dense is sufficient even if it is obviously useful. My opinion is that it is more of a foot in the door, a prerequisite to move on to a more complex job.

Indeed, the search for dense work presents some limitations, in particular the fact that a dense and stable practice is linked to an opposition of structures. This is all fine when my structure is stronger, but it can be problematic if it happens not to be. Another limiting element is that it is a practice that tends to look for some form of rooting, or at least a focus on using the solidity of the ground, which can make it static at times. This is a relatively acceptable thing in an empty handed situation (although still with some limits), a little less so in a a blade situation unless you have developed an “iron shirt” skill strong enough to stop blades . If that’s where you are, I humbly admit my defeat.

Being able to switch from a heavy and dense body to a light and agile body capable of moving quickly or redirecting forces without using the ground is a more interesting compromise for me, and I think closer to what is proposed in Aunkai. If stability was very present in sensei’s teachings a few years ago, it is not uncommon nowadays to see him constantly switch between stability and unstability.

In terms of training, once density is acquired, it therefore requires to put things back in question all over again and make the body more “aerial”. The heaviness in the feet disappears and they become completely free. That doesn’t mean for the upper body structure to “break” and it is possible (I would even say it is desirable at this stage of my reflection) to keep the stability of the box. The upper body rests on the pelvis, which is  “floating”, for a lack of a better word. Somehow the legs are removed from the equation.

The first advantage lies in the tai sabaki. Lighter, it becomes easy to move quickly since the weight is no longer stuck in the feet. And being faster is obviously an advantage since it allows to touch our opponent or avoid his attacks more easily.

The second advantage lies in the quality of the contact. When one is stable, even with a heavy and relaxed body, the given contact may tend to stabilize the opponent. This does not mean that he can stop us, but it can have an impact on the effect we produce. If one takes a simple exercise such as Age Te for example, a stable and dense body will allow you to raise your hands without too much difficulty. Uke will be destructured although he feels the force passing through his body. For Tori the felt effect can be compared to a thick, compact force that envelops the myofascial lines. On the contrary, by freeing legs and feet and resting the upper body on the pelvis, it is harder (at least for me) to feel this compact force, whereas it becomes natural to release the arms and move them freely, dissociated from the legs. The force transmitted to Uke is then more difficult to perceive.

The video below proposed by Thong, the founder of Kaizen Tao expresses this idea perfectly. The exercise is more difficult than it seems (or my Waff is more reactive than the cushion he’s using …) but it is immediately obvious that by standing on an object that unstable, that the force will have to be absorbed differently and that a dense and stable practice does not solve all problems. You might argue that it is rare to have to defend ourselves on a trampoline, and I will be hard pressed to answer this, but by putting a little less bad faith, we an certainly agree that the ground outside is not always as flat, firm and stable as in the dojo, and that there may be something to be done from this point of view.