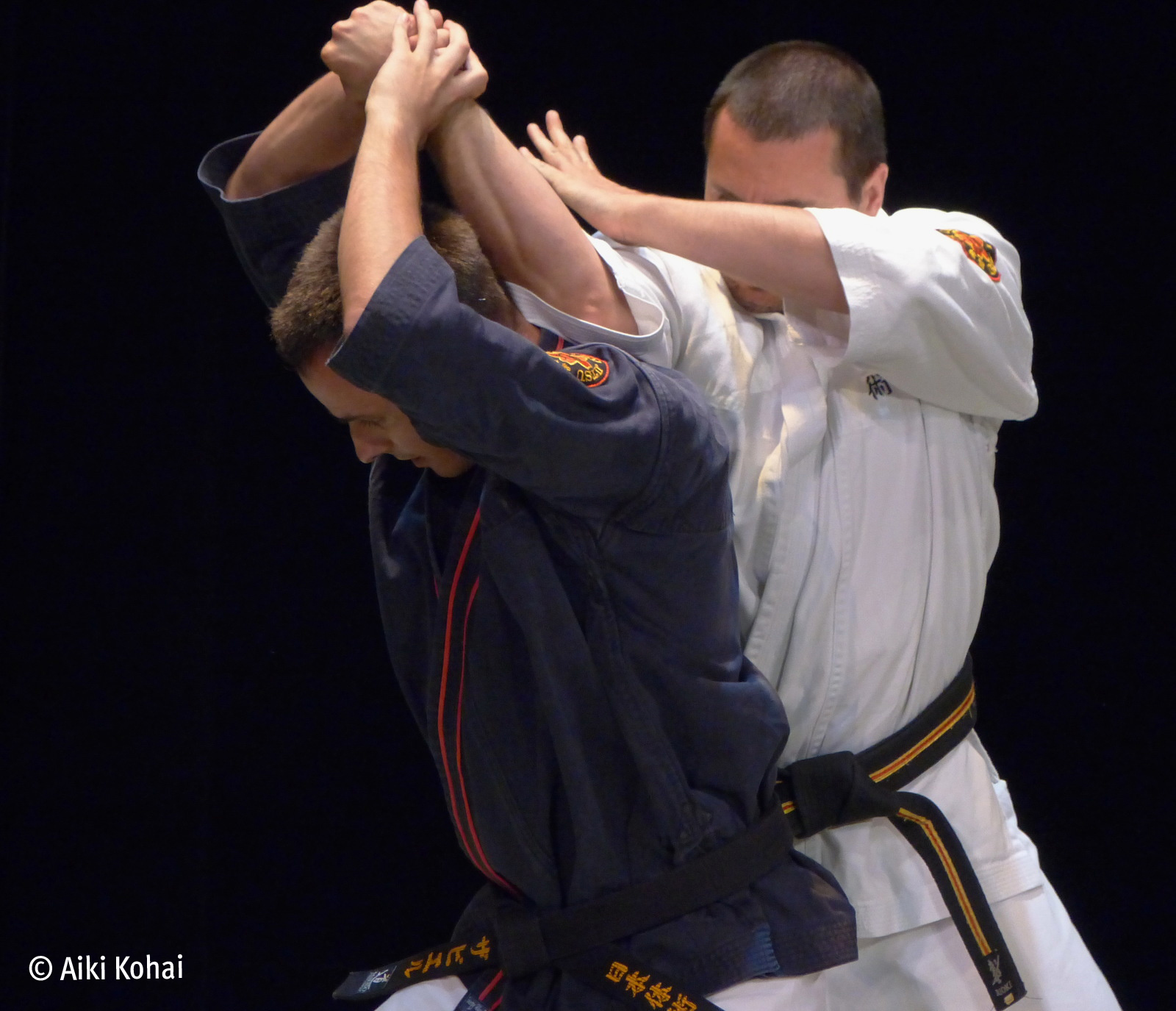 Kaeshi waza (counter techniques) are an essential part of Nihon Tai Jitsu’s teachings, and in my opinion should be in any martial teaching worthy of the name, since these techniques allow to get rid of the Tori / Uke duality and enter a world where both partners seek to win and can exploit the flaws of their opponent. Exploiting these flaws is obviously difficult but it remains essential to start studying the issue relatively early as facing our flaws is the best way to fix them.

In Nihon Tai Jitsu, kata and forms are predominantly unidirectional: Uke attacks and receives Tori’s technique. But two kata make an exception and explore the concept of kaeshi waza: Nihon Tai Jitsu no Kata Sandan, and Hyori no Kata (that comes from Minoru Mochizuki’s Yoseikan Aikido). But if these two kata explore the same thing, they do it in very different ways.

A kata exists only because it has a specific teaching to transmit. This is a point I emphasize because it seems to me that we too often learn a large number of kata without understanding their exact place in the progression and the reason why they were created in the first place. If it is only a matter of learning a succession of techniques, my opinion is that it is not necessary to put them in the form of kata and that if we wet through the hassle of structuring the teaching a specific way, there should be a reason.

Going back to these two kata, what makes their approaches so different when at the end of the day they touch the same topic: counter techniques? My opinion is that there are several ways to counter a technique, but that down the line we can simplify them to two major approaches: the timing and the reception of the technique by the body.

Let’s start with Sandan since it is studied earlier in the method (for the second dan). In Sandan, it is Tori who attacks first, Uke performs his defense, and Tori counters that defense.Tori ‘s initial attack is launched in response to Uke’s intention, materialized in the kata by a movement of the fists.

I already mentioned this in an earlier article, but the materialization of the intention of the attack is for me something that we can do when we demonstrate the kata but that we wh

en we train, because that is an opportunity to work on Sensen no Sen: the perception of the intention before the first movement. In other words, get out of the choreography and try to learn something really difficult. My opinion is as always that if things are easy and comfortable, they do not necessarily have their place in our practice. Nobody has ever reached an exceptional level by working out the easy stuff, at least to my knowledge.

Uke intends to attack and is about to launch his attack. Tori perceives it and strikes first. Uke is surprised and taken aback (which again is possible only if we do not pretend by giving a warning with the fists) and defends, he works on his ability to read Tori’s moves, his availability and his responsiv

eness, which are essential skills. In turn, Tori must react to Uke’s reaction since his first attack failed. He must also make sure to be responsive and available beyond his first attack.

Performed this way, it’s an extremely difficult kata. But that’s also what makes it so interesting in my opinion.

Hyori no Kata is a slow-motion kata in which Tori and Uke counter each other on every single technique. The kata shows precisely the execution of the techniques, how the force is “cancelled” by the one who receives it, and the way to the counter.

“. If I go back a bit, my teaching has three components: the conditioning of the body(ies), the techniques and free applications. In body conditioning, I seek to develop a number of body attributes that are useful when practicing. These “attributes” are the following: neutral, heavy, connected, elastic, fluid, and mobile (we speak here of internal mobility of the various elements of the body, especially inside the torso). Many of these “bodies” can be used for kaeshi waza, and even within Hyori no Kata, but the neutral body is the one that seems to me the most accessible and interesting to get into the kata at the beginning, closely followed by the connected body.

What is the neutral body? It’s the equivalent of the neutral gear in a car. Total neutrality, a body that is naturally In Hyori no Kata, each technique is brought to a “limit” point, so Uke is systematically brought into a configuration where he is unbalanced and in which he has to learn how to manage the forces that are proposed to him so he can get “back into the game “. One way to manage these forces is to understand where our neutral point is, and to try to get back to it. It is not a question of blocking the technique as such, but of neutralizing it by regaining control of our own body.

On this topic, I saw a very interesting intervention from David Orange Jr on Aikiweb a few years back that got me thinking. For those who do not know him, David is an advanced practitioner of Aikido Yoseikan and spent several years  in Shizuoka as Uchi Deshi of Mochizuki sensei. His articles in magazines and posts on various martial arts forums have always been to me a very insightful eye into Mochizuki sensei’s training approah. With his permission, I quote him here:

« So I was thinking about my meeting with Minoru « Ark » Akuzawa and he asked me to do an aikido technique for his attack. He gave some gentle, obvious shomen uchi symbolic attack and I “blended” with it and was “leading” him, when suddenly, he stopped “following” and the “connection” that I had with him, and by which I was “leading” him caused all my energetic contributions to the technique to rebound back into me, myself and I was jolted away from Ark as he suddenly simply stopped.

When I remembered this today, the epiphany was immediate: “He stopped himself”. I knew that, of course, but the significance was how it relates to this phrase I see so often.

Saying that “Uke stopped” my technique is utterly backward. Uke doesn’t stop my technique. Uke stops himself. If he can do that – simply control himself – my technique falls apart on its own”.
– David Orange Jr

Going back to Hyori no Kata, my understanding is that what David describes here is exactly what the kata is made to teach us. It is not a matter of stopping the proposed technique, but of learning  how to manage our own body so that this technique has no more “hold” on us.

To conclude, if the ultimate goal of these kata is to learn to counter the opposing technique, the chosen approach differs greatly, and that is what makes having two kata interesting.