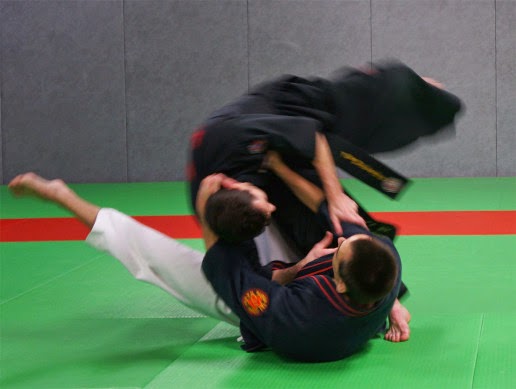 One of the characteristics of Minoru Mochizuki’s school, Yoseikan Aikido, and of the schools inheriting from him (such as Nihon Tai Jitsu) is the use of sutemi. Knowing Minoru Mochizuki’s background in Judo and Aikido, one tends to think these sutemi come from Judo, such as the famous Tomoe Nage.

The reality is these sutemi come from Gyokushin Ryu Jujutu, a school that Minoru Mochizuki studied under the direction of Oshima Sanjuro. Today, the name Yoseikan belongs to Minoru’s son Hiroo (founder of Yoseikan Budo) but the former students of Minoru Mochizuki in Japan gathered under the name of Gyokushin Ryu Aikido. When I trained in Shizuoka, I received a fan with a calligraphy of this name. 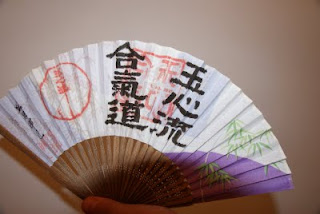 Calligraphy of Gyokushin Ryu Aikido on a fan
An interview of Shimizu sensei on Leo Tamaki’s blog (in French unfortunately) shows that when Minoru Mochizuki was Uchi Deshi of Morihei Ueshiba, the latter was showing sutemi as well.

However, sutemi of the method have some characteristics that I never saw anywhere else, throwing the leg to generate more inertia. This may or may not look acrobatic, but the way it looks does not really matter as long as other execution criteria are well respected.

The main point of a sutemi is that, well applied, it doesn’t require any strength, even better it’s not really possible to use strength. In this sense, sutemi are an excellent tool to understand the non-use of muscular strength. Timing and taking the centre are essential as missing these points would enable Uke to stay on his legs while Tori is on the ground.

Contrarily to what is commonly said, sutemi are not physically demanding as you just need to accept falling to bring your opponent with you. Risks always exist when falling of course but if you look at the people who train in Shizuoka, starting with Washizu sensei (who gives the classes) you can see you don’t need to be 20 years old to train on sutemi.